The Montbrook site is a late Miocene fossil locality that was likely formed thanks to a bend in an ancient river. The current pushed the corpses of the terrestrial and aquatic organisms who died within the river around until a bend lodged them inside the ground and walls of the river. The sediment flowed over them, and they were preserved beautifully until they were discovered by a curious little girl, just over 5 million years later. It is evident that it was a river system due to the sheer diversity of fish, turtle, and even alligator fragments and skeletons that are discovered. While the site is rich with large elephant ancestors known as Gomphotheres, it is nigh impossible to go through a day without finding a fragment of the much more common Trachemys. Or rather on my first day, over 200 fragments.

I hopped out of the van and observed the locality. Even from the high position in the site where I was standing, I could see a jacketed alligator skull as well as at least one turtle shell poking out from the ground. I immediately looked down at my feet, and recognized a glimmering chunk of rock lodged in the sand. Further inspection revealed another, than another. Five minutes in and I had already found evidence of Trachemys, before I had even been assigned a square. Eventually I was assigned a square with a pre-exposed turtle shell. As I dug around it, I quickly found elements of the species that dwelled beside Trachemys, alligator osteoderms, fish spines, even limbs of other turtles. The squares around me yielded similar bounty, a classmate even discovered a rhino toe. The image of a rhino wading through a slow current river, with turtles, alligators, and fish swimming below unbeknownst to it quickly popped into my mind. Eventually my exposed Trachemys was determined to not be worth a jacket, so it came out and was sorted by section, piece by piece. 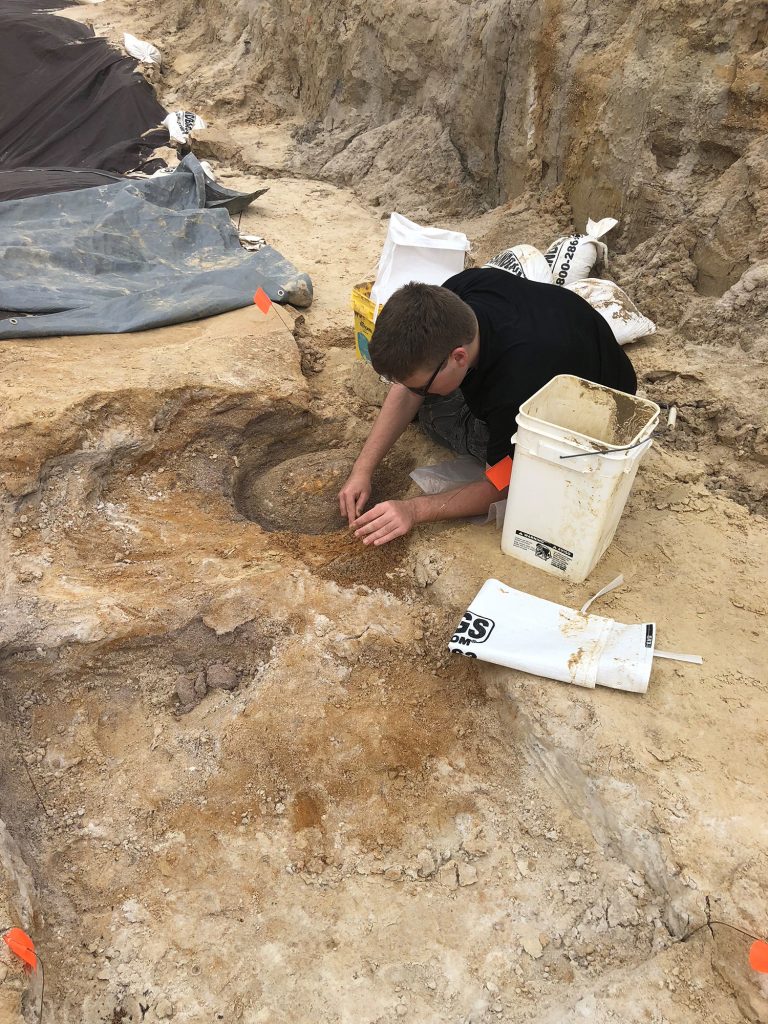 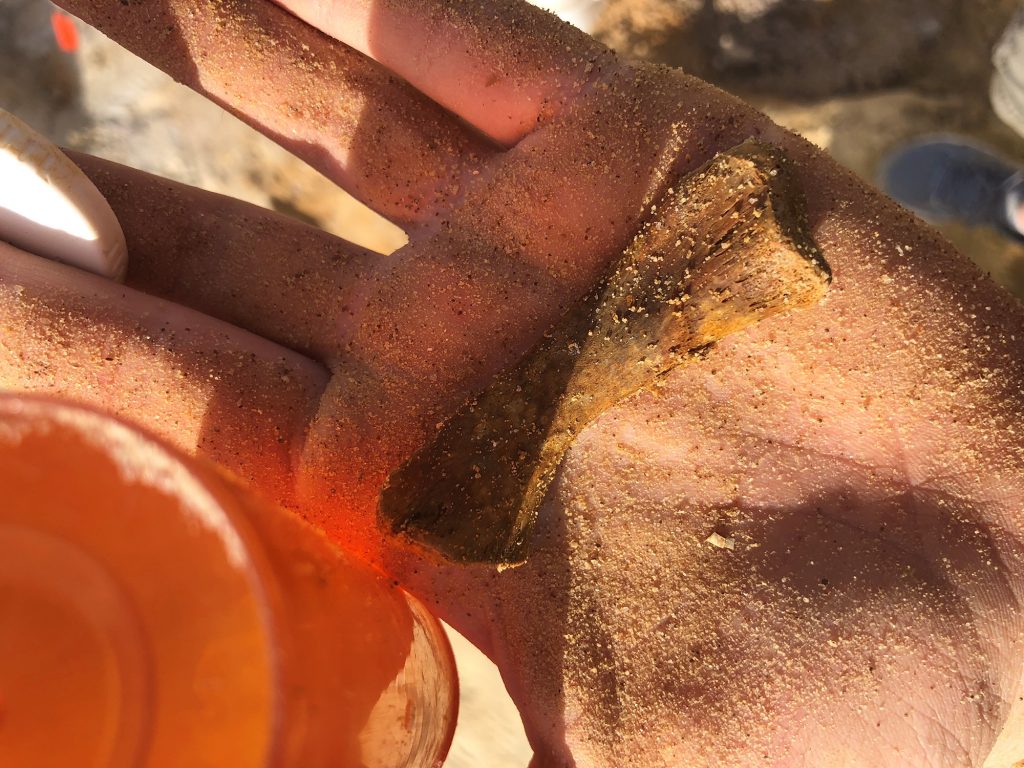 Alligator snapper limb bone. Turns out there’s more than one kind of turtle 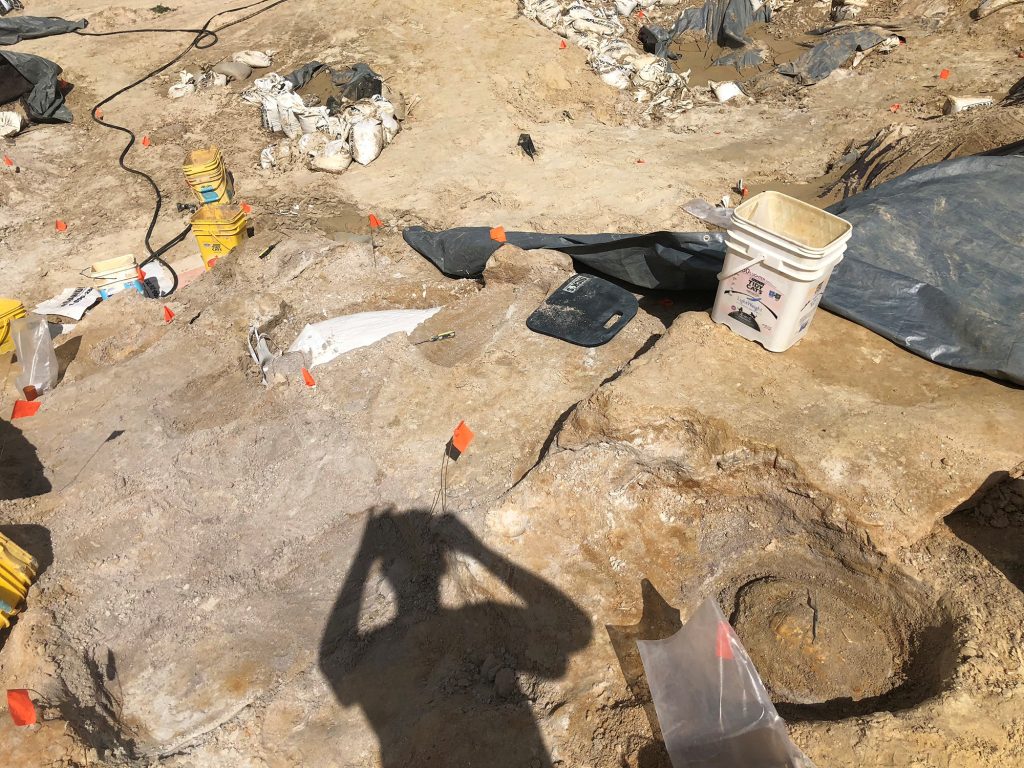 View of my work area. 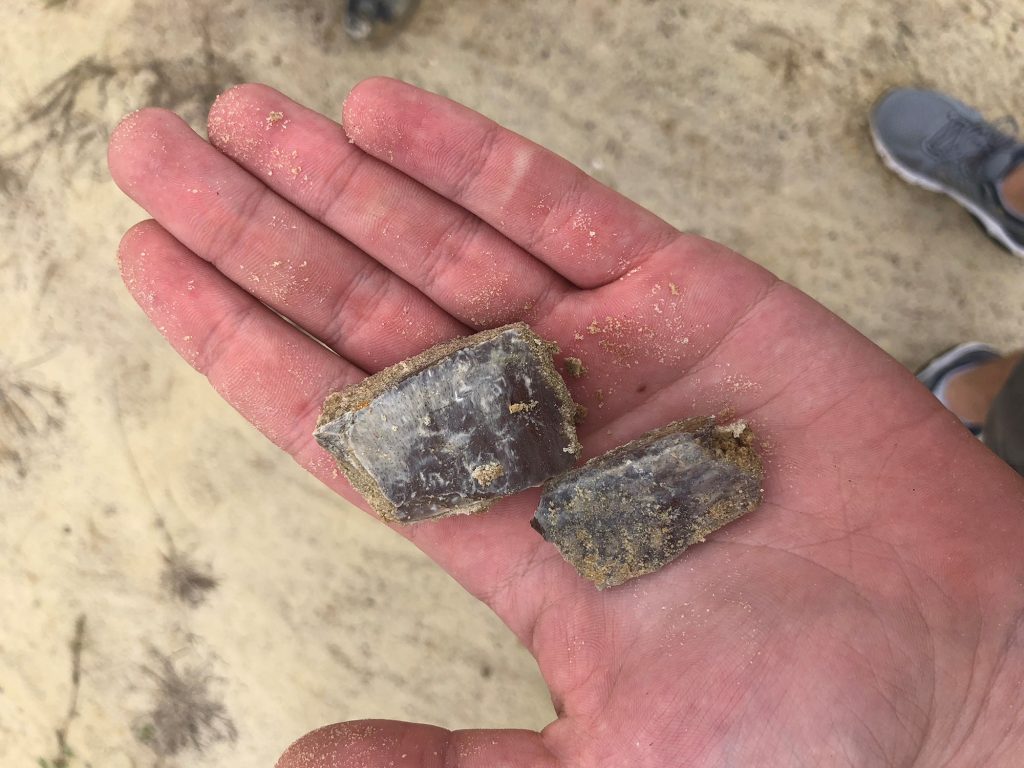 Those first few warning signs (pieces of Trachemys) of the day to come.

This is excellent photo series by Jackson to understand the process behind plaster jacketing a large specimen. Click through the images for the story… 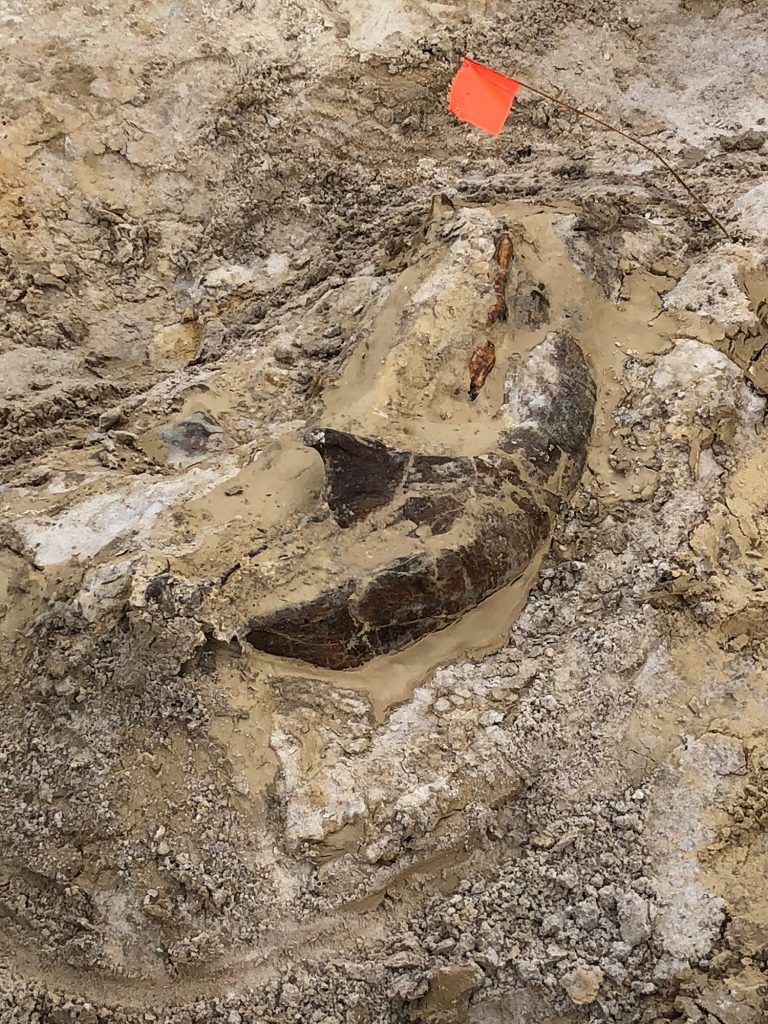 On day two at the site, we exposed a large and relatively intact left and right gomphothere jawbone. It was covered with a tarp, which was than completely coated in wet mud and dirt from a recent rainfall. It was difficult but rewarding work to finally expose this gorgeous specimen. The enamel in particular on the preserved gorgeous in-situ teeth was my favorite part. We then dug about a three-foot trench around the specimen. 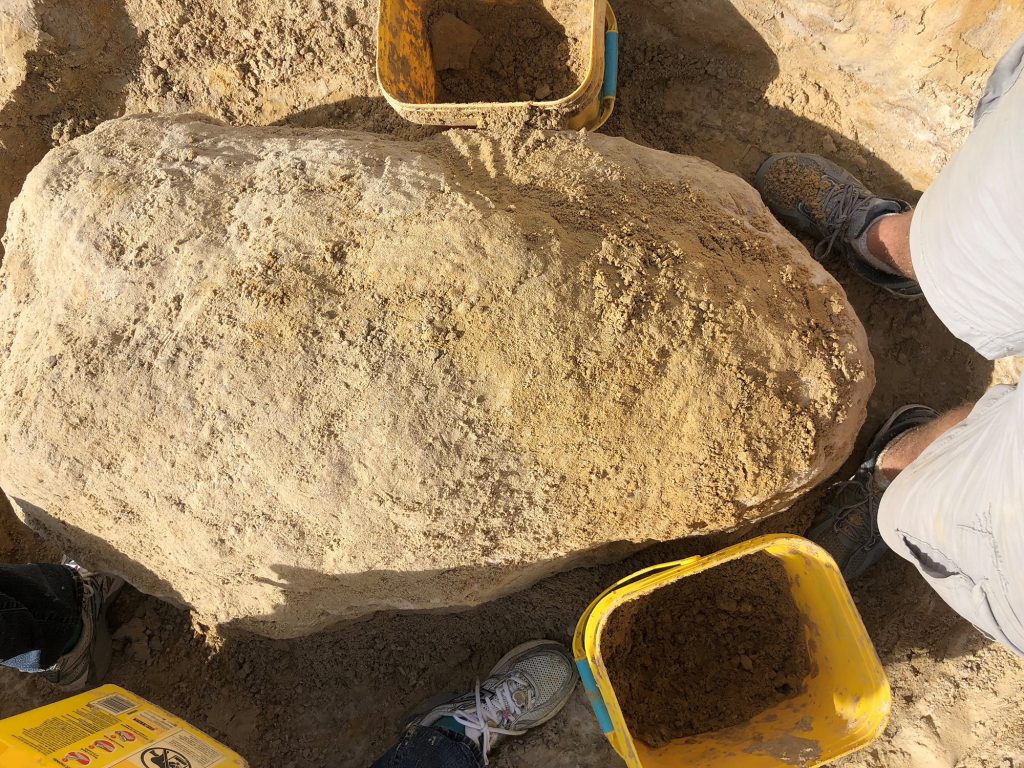 We then took dirt from the trench and softly packed it on top of the specimen. We made the dirt quite level so that the more exposed aspects of the fossil don’t receive an abnormal amount of pressure that could fracture them. The top exposed portion will be the bottom layer adjacent to the ground, but it will also be the most sensitive as it is closest to the fossil. You can see the trench is deeper in this photo. It was kind of sad to cover such a beautiful fossil, only to be revealed when it is eventually cleaned in the prep lab. Perhaps by me. 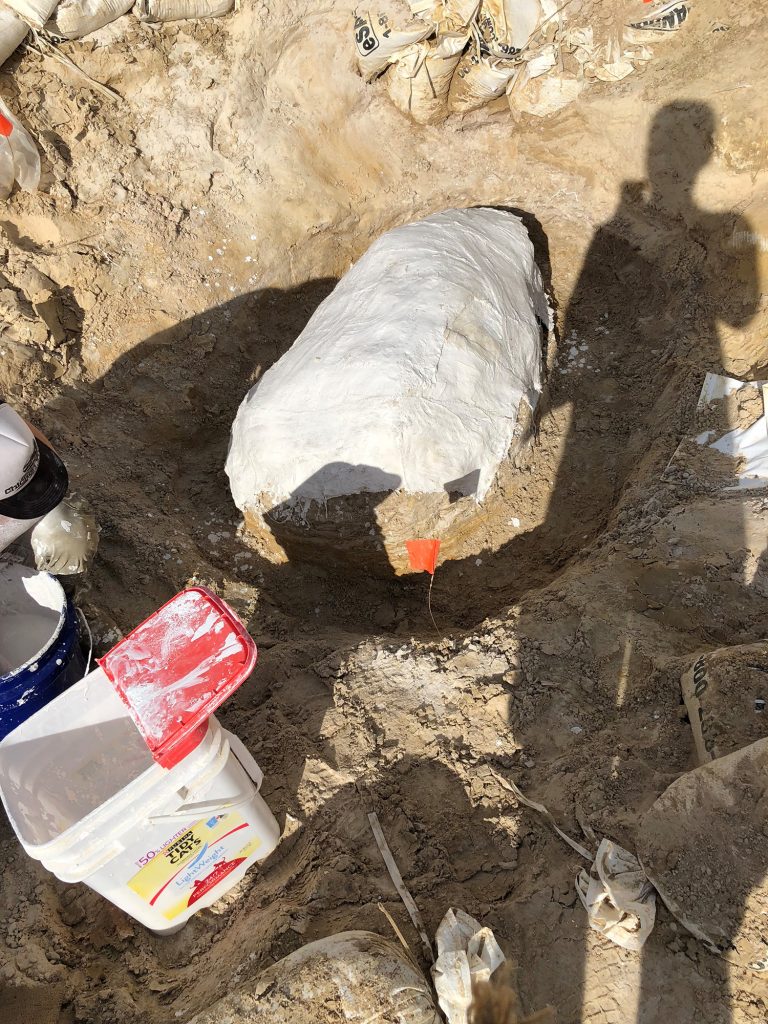 The next step to get this specimen into our collection was to prepare a plaster mixture in the bucket with water and plaster of paris. A plaster jacket consists of strips of fabric dipped in this mixture, than laid strategically crosshatched across the specimen. This was the first layer of plaster. It is difficult to estimate how much plaster comes from one batch of mixture. It dries rapidly, so a team of two or three workers has to move fast. 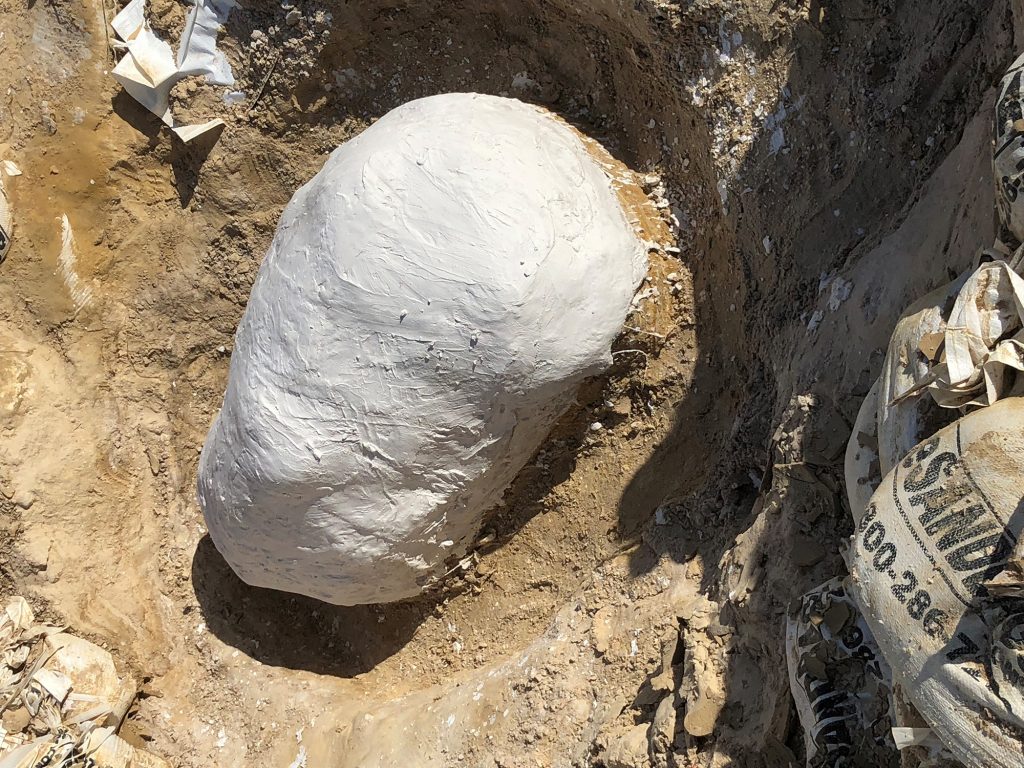 The second, than third layer went on without a hitch. It is essential that the edges go down flat and no air bubbles form so the jacket is as durable and protective as possible. It made sense why we dug such a large trench around the fossil, we had to move very fast and distribute the plaster all the way around it. I give a huge thanks to Natasha for teaching me how to do this, and being patient through the learning curve. 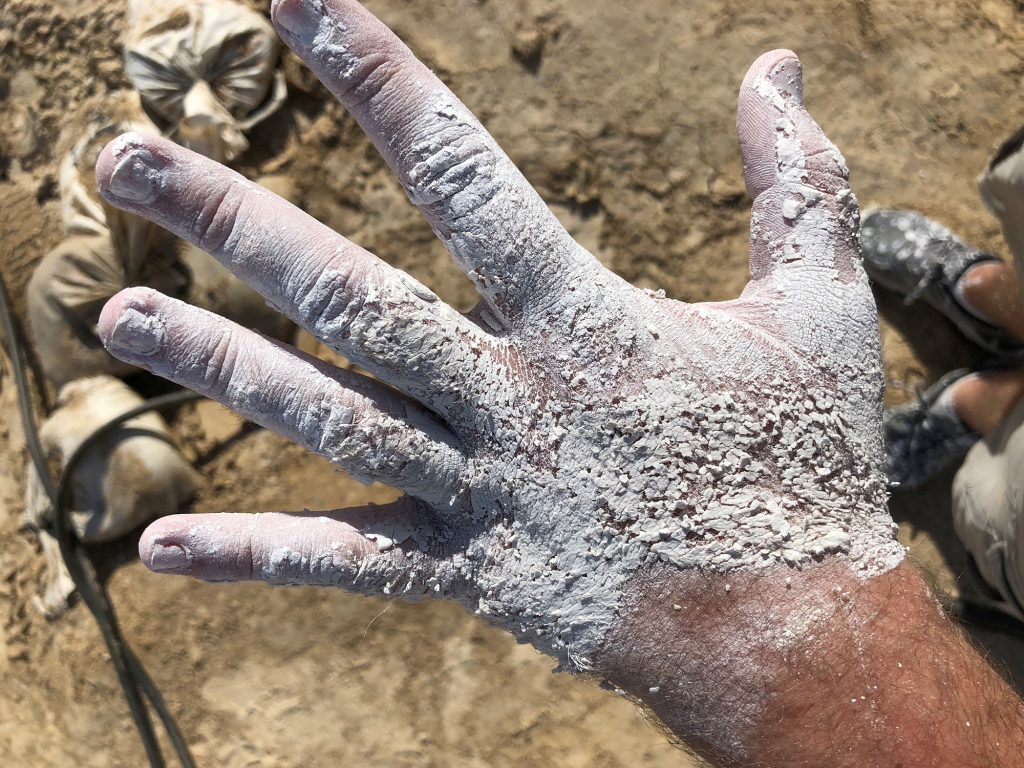 Don’t do jackets if you aren’t ready to get dirty. There is very few ways to minimize the mess. However, it is kind of fun. You can see my now plaster covered shoes in the photo. 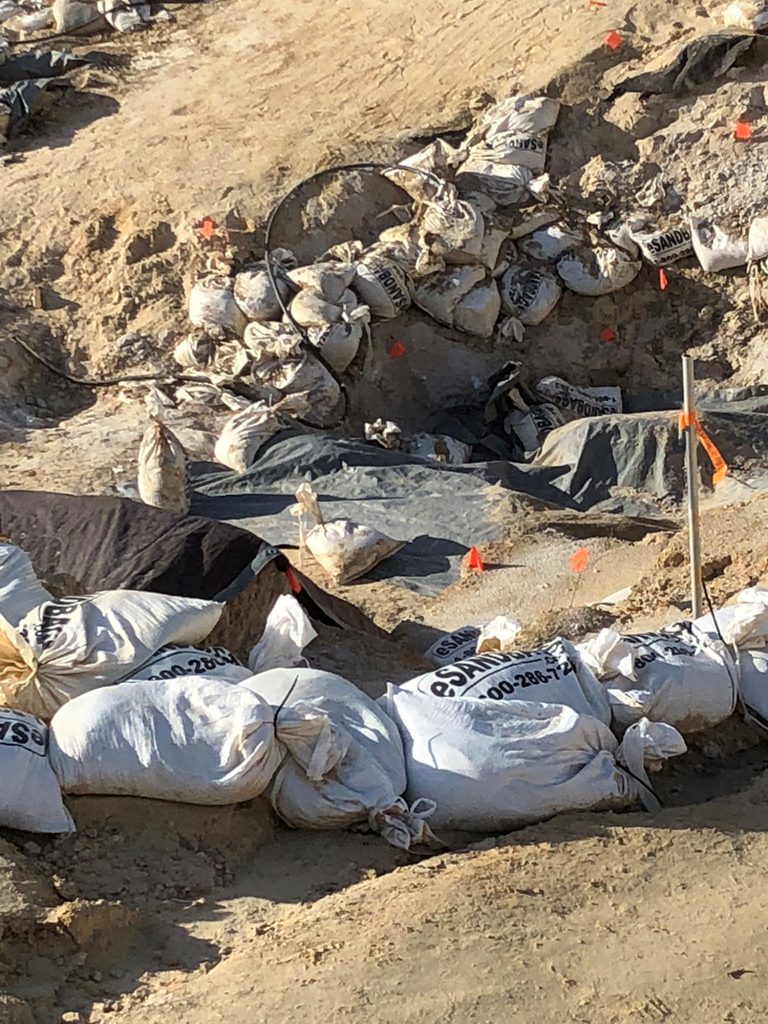 Eventually. A team will dig around the area, make it even, and clear it for moving the fossil. They will dig under it, attempting to make a flat surface, and will flip the fossil onto net for carrying it out of the pit. Unfortunately, we didn’t have time to do this the day I was there as neither time, nor the weather was on our side. We cleaned off and strategically placed a tarp over the site, so the rain and runoff wouldn’t do too much damage to our new jacket. This process was how I spent most of day two, and I thoroughly enjoyed it!

My first experience at the Montbrook was both extremely similar and different from my last.

I begun in a square that already had an exposed Trachemys in it, and I ended 6 feet on top of a partially exposed Gomphothere jawbone. I learned a lot from Doctor Bloch and Doctor Hulbert, and learned a lot of techniques and how people approaching from different perspectives. For instance, I learned that certain paleontologists prioritize post-crania as it reveals more about the bio-kinetic evolution. Others prioritize crania specifically as it can reveal more about the distinct species of organism. I also learned about the amount of project management skills that go into running a dig site. Considering I drove with the bus, I saw more of how the days begin and end, and a lot of it is deciding how to best assign manpower and what to prioritize. Larger exposed specimens typically are prioritized over standard digging on squares. But despite this trend, there are areas in the site where we know there are Gomphothere specimens are still exposed under tarps that we rarely approach. I learned that this is because it takes a lot of difficult labor to dig from top down onto specimens lodged in slopes. I’m still curious about how the grid system will be used to interpret the site, especially when the runoff has moved so much of the dirt.  There is far more thought that goes into planning and executing the whole operation than most people see, and I hope to learn more about it as I continue to volunteer.

We were so lucky to have the failed jacket split perfectly in half and not damage either side of this gorgeous specimen. It was somewhat sad to see the jacket I’d worked so hard on for several weeks fail. Oh well, some disappointment is part of paleontology, and we will still get both parts of the specimen.

I dug for a solid eight hours over two days to remove dirt off of the tusk and jaw specimens. It was worth it, as now other volunteers will be able to trench and jacket them. It was so exciting finding something bigger than a turtle. I’ll definitely be back to get these specimens out of the ground, and maybe I’ll even get to prep them in the lab! 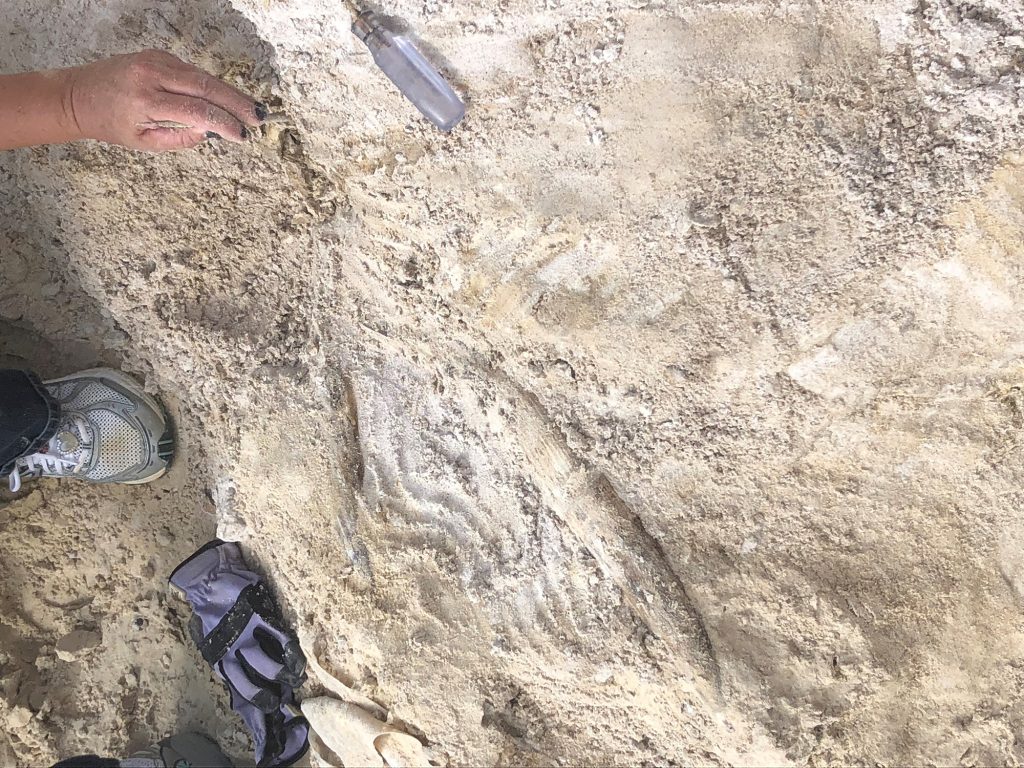 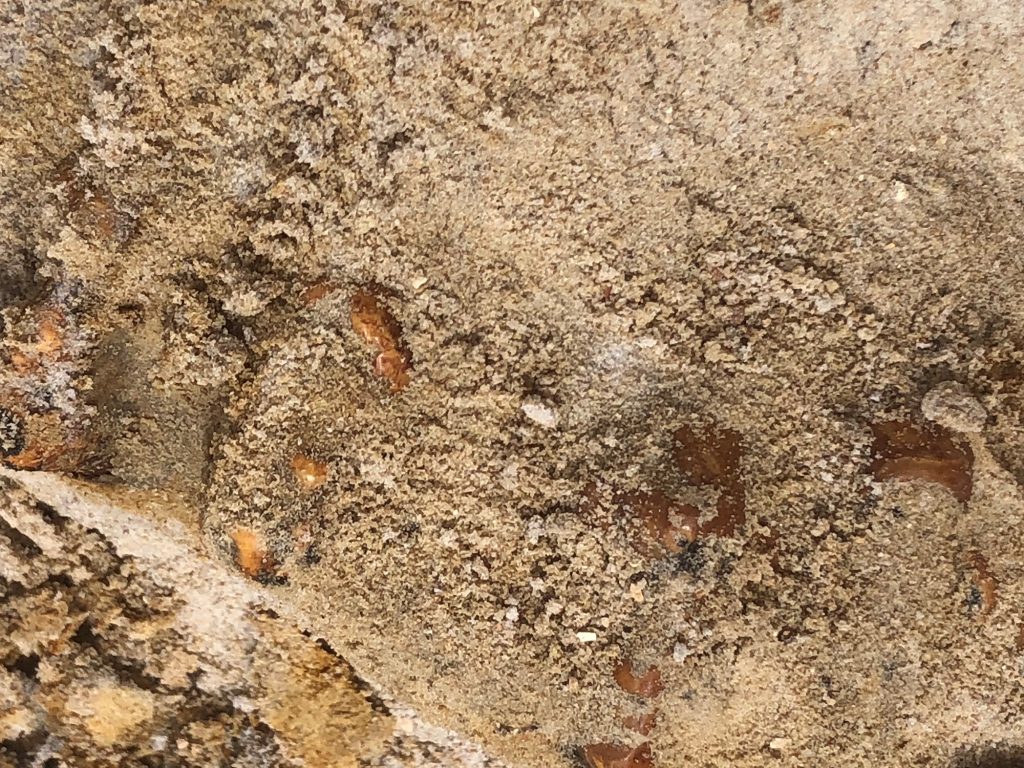