When mentoring students, I have three main objectives:

My mentoring style is generally hands-off, and I encourage my students to come up with independent project ideas. I embrace the importance of “stupidity” in scientific research.

Mentoring was one of the most rewarding parts of graduate school, and I am happy to feature the students who worked with me and completed independent research projects below.

At the University of Florida:

Daisy Renteria (2013-2016), University of Florida, Dept. of Biology.  Daisy followed up on our research of nest materials used by the campus mockingbird projects, before taking on the task of organizing our hundreds of blood samples, the corresponding data, and the DNA extracts. She also performed hundreds of DNA extractions and PCR reactions. She graduated in 2016 and stayed in Gainesville working in multiple positions.

Jacklyn joined the lab as a rising sophomore, worked in the field, in the molecular lab, on literature research and many other projects. She is a multitalented scholar-athlete, and started medical school in Fall of 2016.

Following graduation, Zoe worked as a research assistant in multiple labs at the University of Florida, and most recently took a field technician position in Cairns, Australia to study fairy-wrens.

Erin Rawls (2013-2015), University of Florida, Dept. of Psychology.  – “The effect of foot and car traffic on Northern Mockingbird nesting success” – Graduated with Highest Honors in May 2015, best undergraduate talk at the Undergraduate Research Symposium in April 2015.

Erin started her career as an avian biologist with working in the field in New Jersey, Costa Rica, and took an education recruiting position near Dallas, TX as of 2016.

Alison started Vet School in the Fall of 2015.

Daphna Shaw (2009-2010), University of Florida, Dept. of Biology.  “Male parental investment, relatedness, population density and territorial proximity as factors promoting extra-pair paternity in the Northern Mockingbird” – Daphna received funding from the University Scholars program, and the Wilson Ornithological Society for her work, and she finished graduate nursing school in Pennsylvania and is now a PICU nurse. See Daphna’s poster from the University Scholars Symposium. 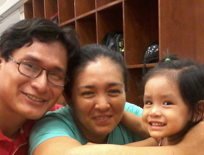 Danilo Santos (2012), Universidad INCCA Bogota, Colombia.  “Breeding biology and behavior of Chelidoptera tenebrosa” – Danilo defended his thesis with distinction in 2015 and has been working as a biologist.

Camilo received funding/gear from the Idea Wild program for his fieldwork, and he defended his thesis on July 3rd, 2013 in a public presentation at his university. He has continued working in the field in Ecuador, Panama, and his native Colombia. He is now a Ph.D. student at Virginia Tech, supported by the Fullbright Program.