Most adult Rim Rock Crowned Snakes are about 7-9 inches (18-23 cm) in total length. These small and thin snakes are tan to light brown with a dark brown or black head and neck. The tip of the snout is tan-colored. The eyes are small. Juveniles are similar in coloration to adults. 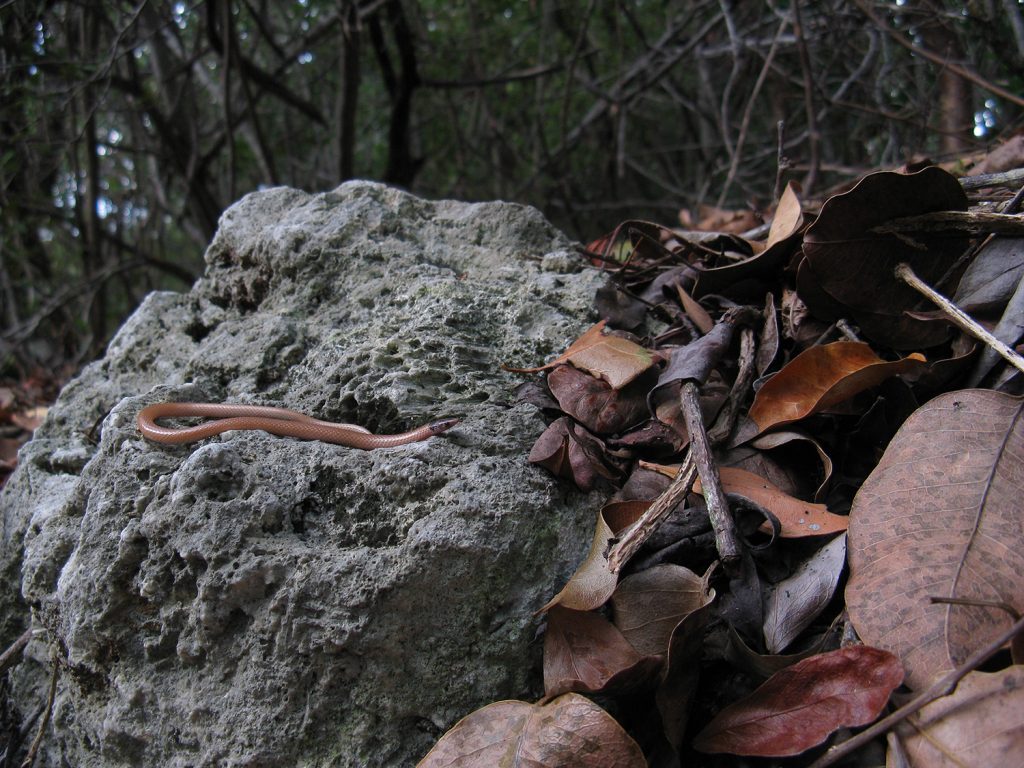 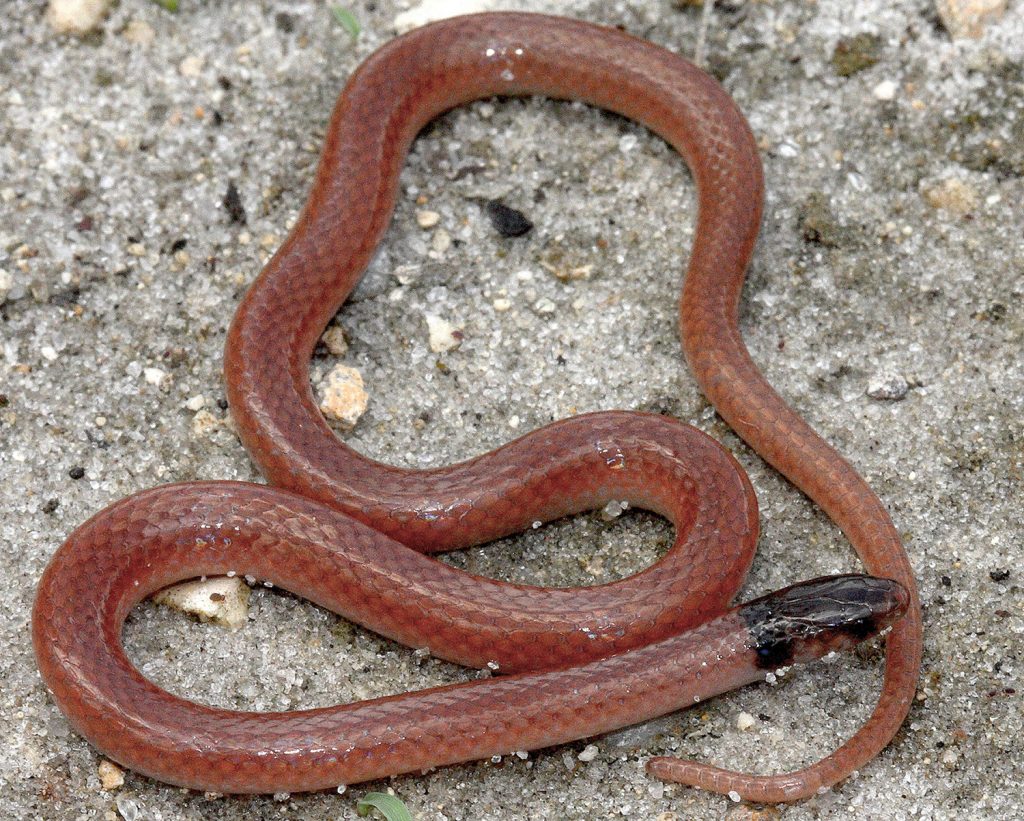 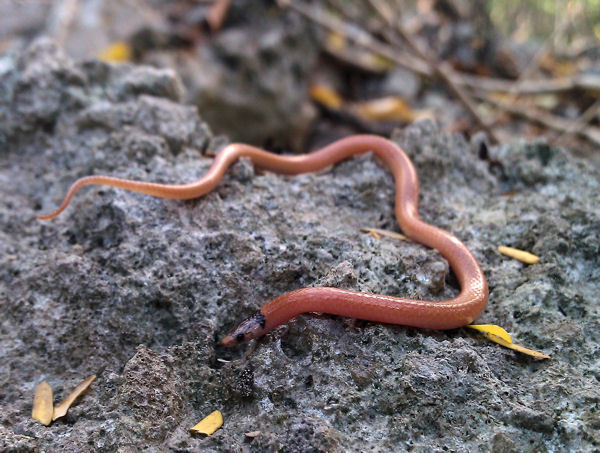 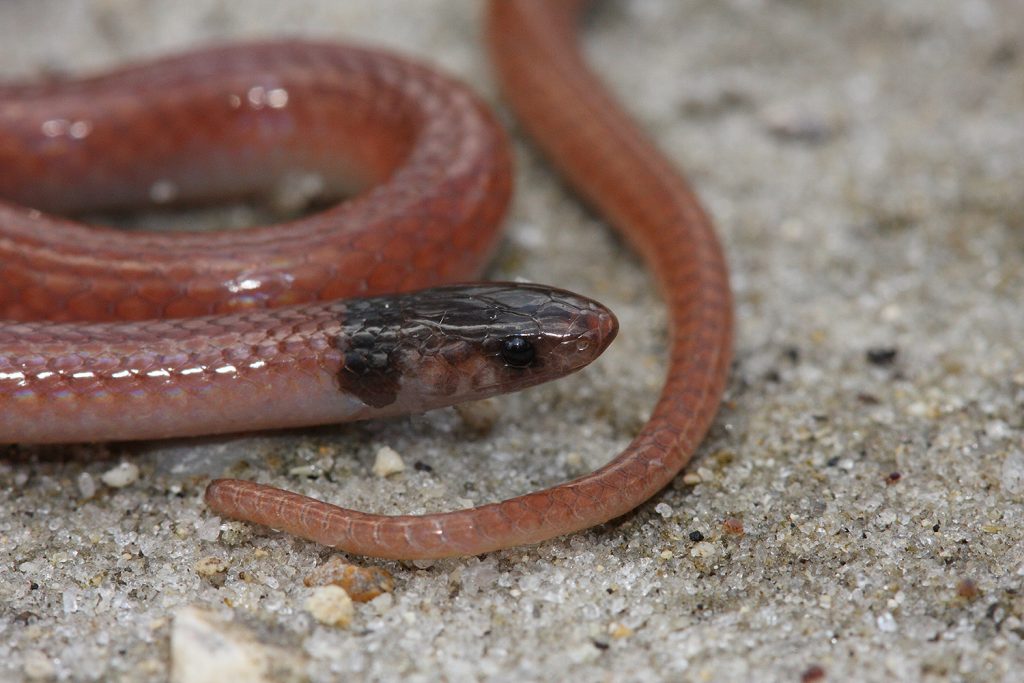 Rim Rock Crowned Snakes occur only in Miami-Dade (mainland) and Monroe (Florida Keys) counties. It has been found from Key Largo to Key West in the Florida Keys. This species only occurs in Florida.

Non-Venomous Rim Rock Crowned Snakes are not dangerous to people or pets even though they likely produce a mild venom that is used for subduing prey. The venom is delivered by two slightly enlarged grooved teeth at the back of the upper jaw. However, these snakes are not aggressive and do not bite even in defense. 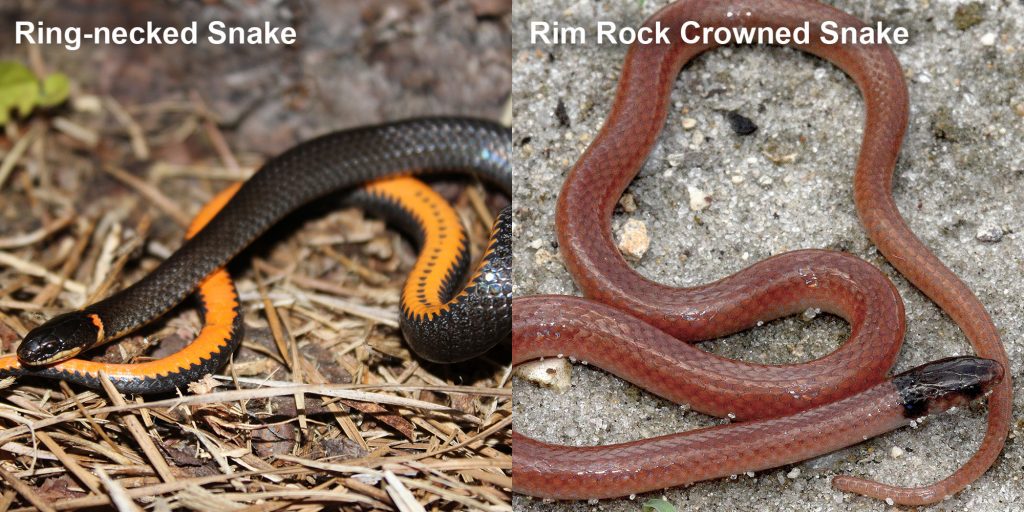 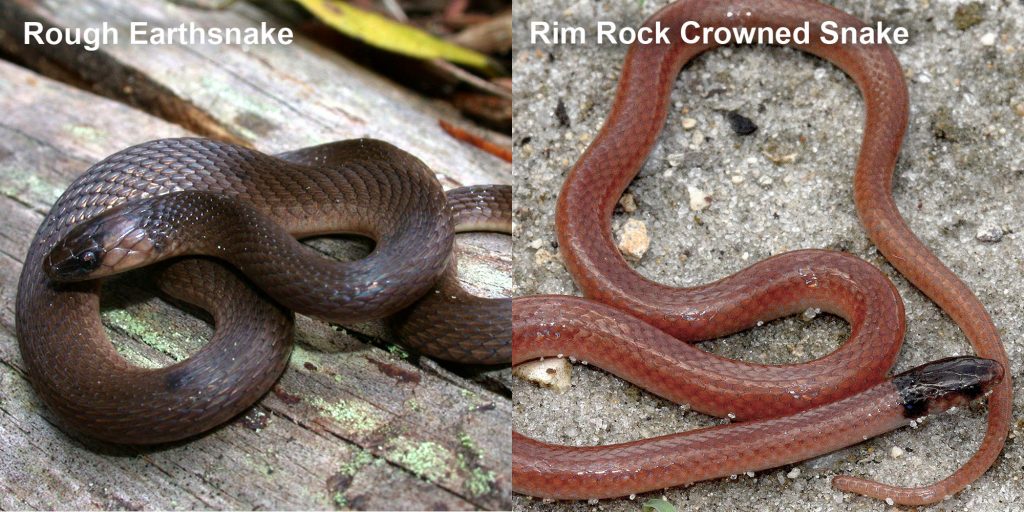 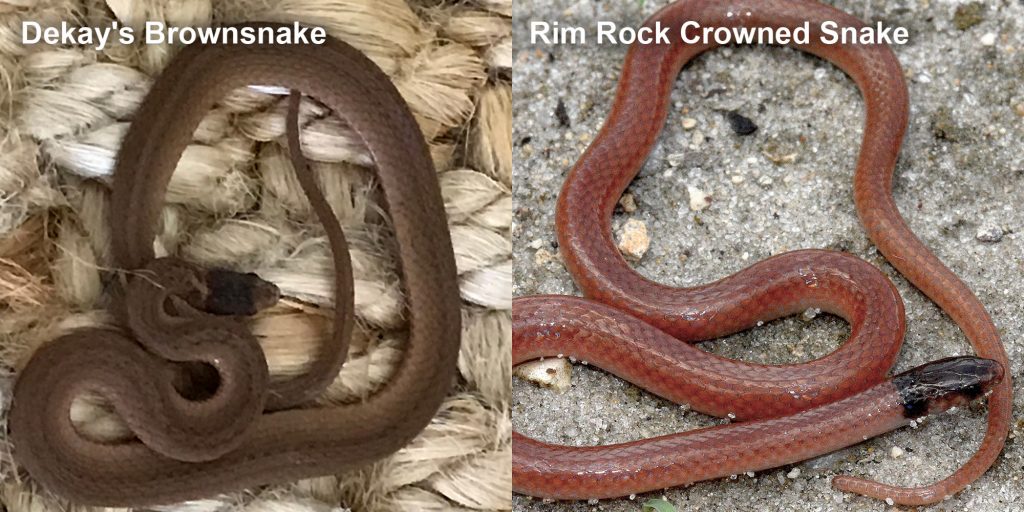 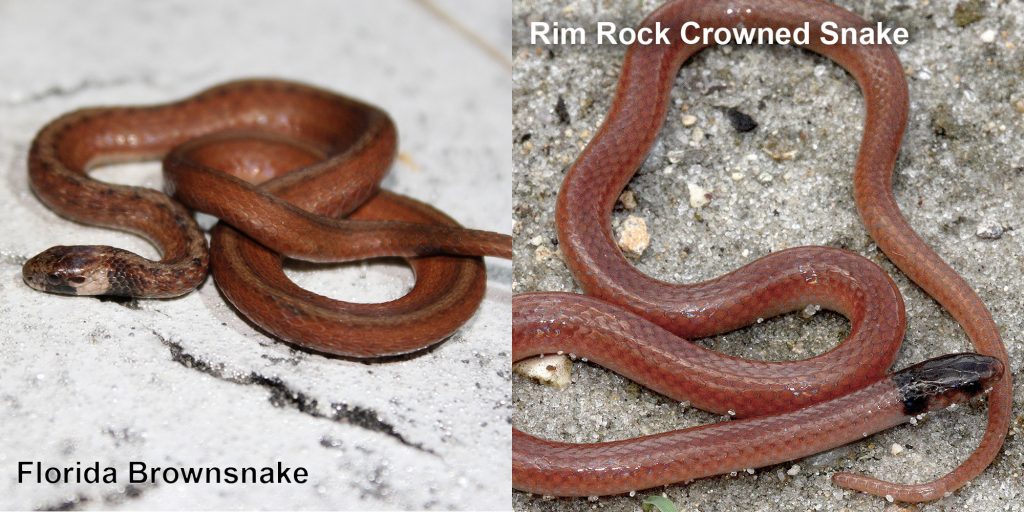 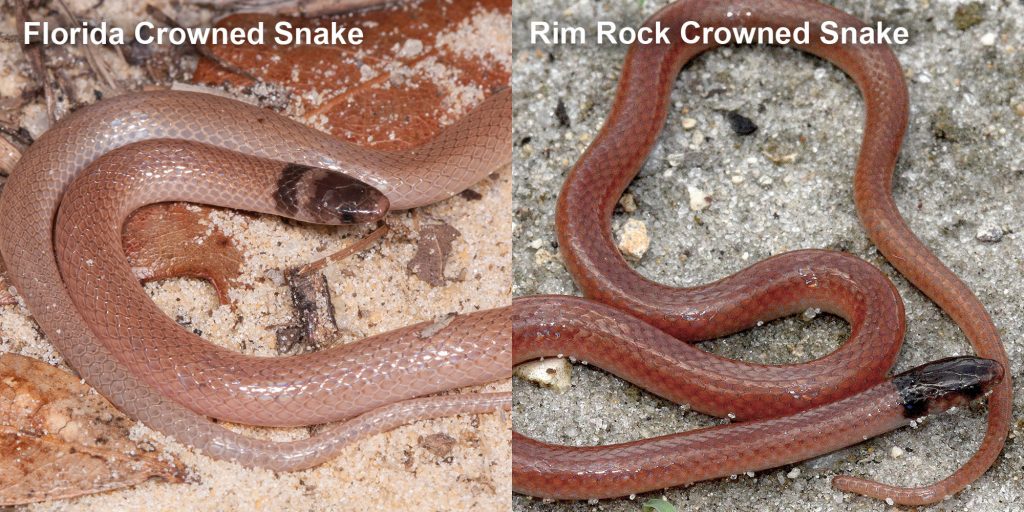 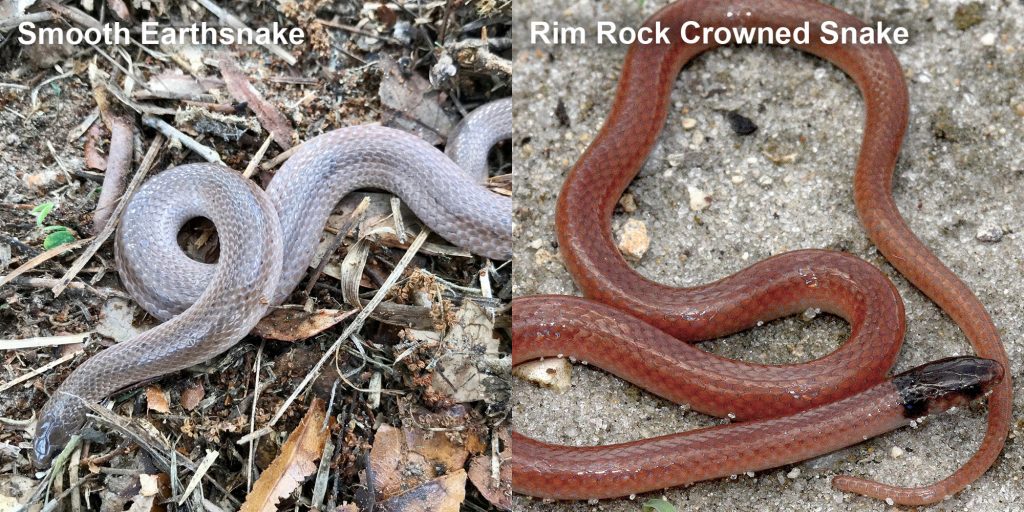 Adult Rim Rock Crowned Snakes are about 7-9 inches (18-23 cm) in total length, with a record length recorded of 11.5 inches (29.2 cm). These small and thin snakes are tan to light brown with a dark brown or black head and neck. Snakes on the Florida Keys often have a complete or broken light-colored band across the back of the head separating the dark head from the dark neck. However, the light-colored band is often missing entirely in snakes on the mainland. The tip of the snout is tan-colored. There is typically a small pale blotch on the side of the head behind each eye. The belly is white or cream-colored and without markings. The scales of the body are smooth and there are 15 scale rows at midbody. The eyes are small, and the pupil is round. Juveniles are similar in coloration to adults.

Rim Rock Crowned Snakes are typically found in pinelands and tropical hardwood hammocks. On the mainland, they occur on a low elevation pine ridge called the Miami Rim Rock formation. These secretive snakes are mainly found under limestone rocks, logs, leaf litter, and other debris.

If captured, Rim Rock Crowned Snakes may squirm and release foul-smelling musk from two glands in the base of the tail.

Little is known of the diet of Rim Rock Crowned Snakes, but they likely feed primarily on invertebrates such as centipedes, beetle larvae, earthworms, snails, and spiders.

Nothing is known about reproduction in Rim Rock Crowned Snakes. They are assumed to lay around 1-4 eggs like the closely-related Southeastern Crowned Snakes (Tantilla coronata).

No subspecies of Rim Rock Crowned Snake are currently recognized.

This species was first scientifically identified using a specimen collected from a now-vanished vacant lot in Miami, where it was found on Miami Rim Rock made up of oolitic limestone, hence the name Tantilla oolitica. This species is extremely rare, and very few specimens are known to exist in museum collections. As a result, this species has been listed as state threatened by the State of Florida since 1975, primarily because of habitat loss in the Miami area and Florida Keys.

Banner photo courtesy of Dustin Smith. Please credit any photographers on the page and see our copyright policy.