I have always loved to read, but it is a pastime that I seldom find time for these days. As my schedule this summer began filling up—classes, interning, tutoring, general life stuff, etc.

I realized, much to my dismay, this summer was not going to serve as an opportunity to catch up on the titles I promised myself I would finish, so when it came time to write a blog post as part of my internship at the Florida Museum, a book review was the obvious choice. 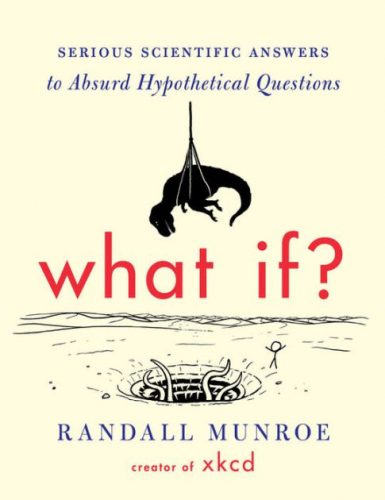 Randall Munroe is one nerdy dude, and if you too identify as a nerd, I promise this book is worth your time. He worked on robots at NASA’s Langley Research Center in Virginia, and after he left, he began xkcd.com, a website where people send their absurd questions and he answers them with scientifically valid responses accompanied by comic sketches. The website inspired the book, and some of the questions in the book were originally answered on the website. The questions are incredible, for example, “what if I took a swim in a typical spent nuclear fuel pool?” A lot of the success of this book can be attributed to the creativity of Randall Munroe’s inquirers.

I think I enjoyed this book as much as I did because I like the idea of an adult man spending his time doing actual research and performing actual calculations to answer questions like “what if there was a pole connecting the moon to earth?” I spent many years in school watching irritated teachers roll their eyes when students asked questions that began with the phrase, what if. I learned those questions were somehow less valuable to the discussion, so I didn’t ask them. This book feels like redemption for students whom adults deemed tedious and annoying—especially considering Bill Gates included What If? in his 2020 summer reading picks. 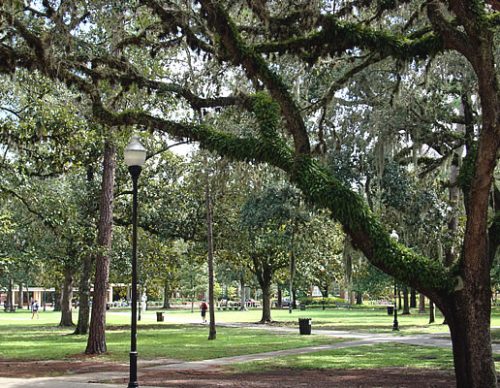 Another question Randall gets asked is, “what did Times Square look like 100 years ago, 1,000 ago, 10,000 ago, 1,000,000 ago, 1,000,000 ,000 ago, and then what will it look like in the future?” I decided to make this into my own hypothetical question but change Times Square to Plaza of the Americas. I like this question because 1) it is big natural history energy, 2) the math is easy because the year is currently 2020, and 3) I anticipate uncovering new facts about a place I frequent.

One hundred years ago, too easy! Okay so 100 years ago it was 1920, and Plaza of the Americas had not yet been dedicated as such. The Plaza was simply the quadrangle back then—still a popular place for white, male students (UF was exclusively admitting white men at this point). Students might have been on their way to the chemistry building or the agriculture building, but they were not heading towards Library West— it didn’t exist yet. 1920: Plaza of the Americas is a patch of grass on UF’s campus!

One thousand years ago, the year was 1,020, and the University of Florida was well on its way to becoming the 9th best public university in the country—kidding. In 1,020, UF didn’t exist and the Plaza was probably grass, but, thanks to some Florida State Museum (previous name for Florida Museum) archaeologists and students, in 1976 a burial mound was excavated near UF’s law college.

This has given the Gainesville community some insight into the people who inhabited what is now North Florida. The mound was created by the Alachua Tradition Peoples. Alachua Tradition refers to the group of people living in North-Central Florida 1,000 years ago, and the Florida Museum’s Ceramic Technology Lab has some items from these people. 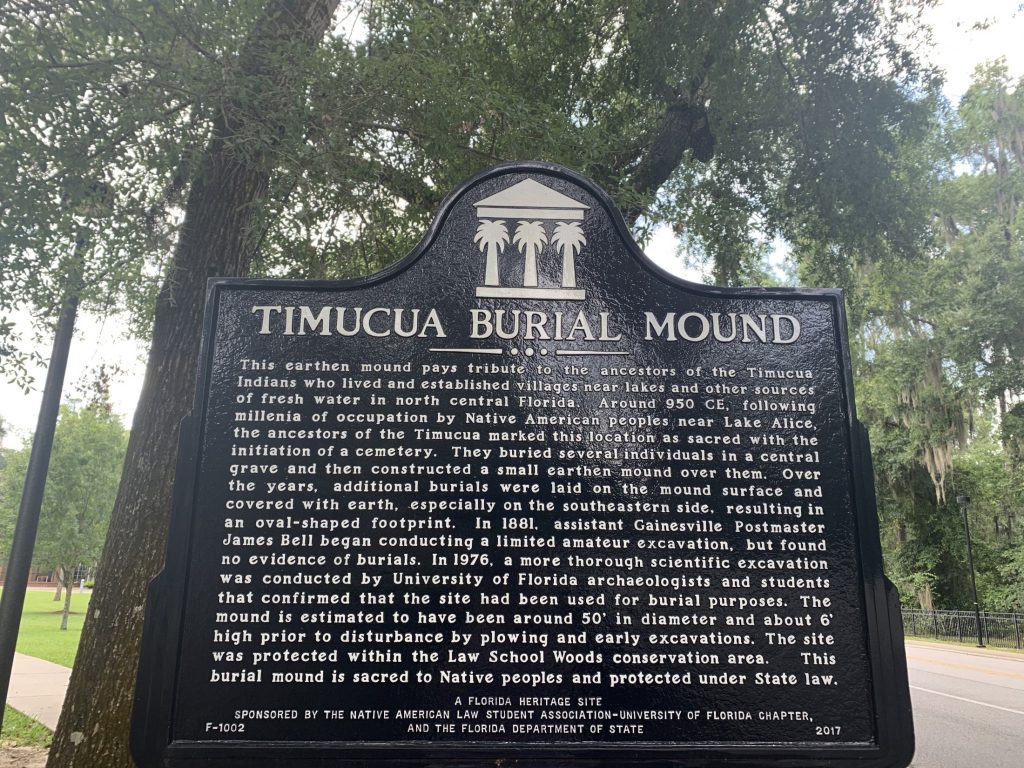 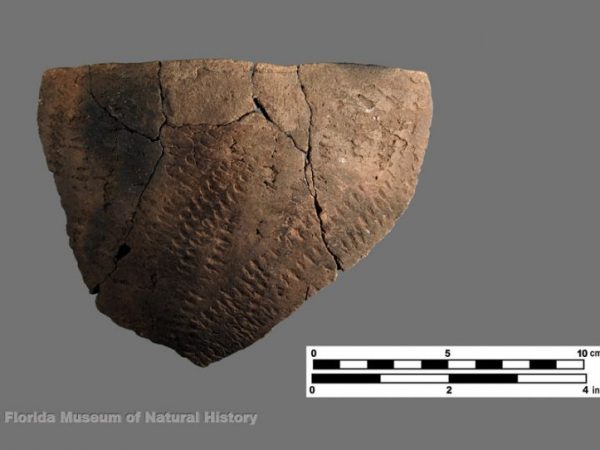 While researching, I found one report from the Florida Climate Institute, stating that Newnan’s Lake and Lochloosa don’t drain very well. Sediment taken from those lakes showed pine dominating pollen assemblages and high concentrations of charcoal. In the report, it talked about the poorly drained lakes’ sediment composition—pine and charcoal—and how it differed from Florida’s well-drained lakes, and that difference in sediment coupled with evidence of abundant fires near Newnan’s Lake (previously known as Lake Pithlachchocco) and Lochloosa probably means Gainesville had greater seasonality. 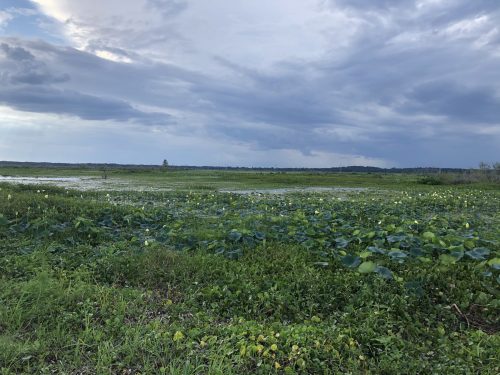 The dramatic changes from a really wet, wet season to a really dry, dry season would lead to optimal conditions for fires, so the Plaza was on fire 10,000 years ago? Or it was just raining? I reached out to Dr. Lindsay Bloch, Collections Manager for Florida Museum’s Ceramic Technology Lab, and she had some ideas for what Plaza looked like 10,000 years ago—probably like Paynes Prairie.

As far as humans go, they could have been at Plaza 10,000 years ago. There definitely were humans in Florida because people first appear in the fossil record 14,000 years ago. The Aucilla River Kill Site, about an hour from Tallahassee, is an excavation site that showed humans hunted big mammals or megafauna, and that could have been happening in Plaza but we don’t have a record of it like the Aucilla River Kill Site.

One million years ago would put us at 997,980 BCE, so we have officially left the Holocene and we are in the Pleistocene. During this time much of North America was covered by glaciers, but the legacy of the Sunshine State is an enduring one—the glaciers that covered the rest of North America stopped about 900 miles north of Florida. During interglacial periods, Florida looked like the parts of Florida we know today that haven’t been altered by humans.

The plaza was probably pretty swampy in 997,980 BCE. The Pleistocene was an especially wild time for Florida. While the rest of North America was literally freezing, some parts uninhabitable, megafauna like mastodons and mammoths migrated south towards us. The Florida Museum’s Fossil Hall features fossils from the Pleistocene, like the giant ground sloth.

Although there were no undergraduates swinging in their hammocks from ancient, swampy trees, there were alligators. Alligators are actually quite incredible because, for at least 8 million years, they really haven’t changed. Evolution looked at the alligator, shrugged, and decided not to mess with a good thing, and to that, we all reply in unison, go gators!

What I’m trying to say is… I don’t know where Plaza was or what it looked like a billion years ago. I can tell you this, the East Coast of North America was probably adjacent to western South America—so maybe Plaza was next to Chile? —and I can also say, there wasn’t much living on the Plaza. Earth had five percent less oxygen than it does now, and we didn’t have the ozone layer which blocks UV rays. At this time, life on earth had not progressed past single-celled algae, so 1,000,000,00 years ago it was just continents keeping each other company.

One million years in the future I’m assuming the WIFI in the Plaza will be a lot faster, and I’m hoping it will be a place where human students and robot students can come together and share a hammock. The human student will look at the robot student and say, “Hey, do you ever wonder what this place looked like one hundred years ago?” And the robot student will reply, “no, but I know a place where we can find out.” And the two students wrap up their hammock and make their way towards the Florida Museum.

In true Randall Munroe fashion, here is a comic sketch of me reading his very great book, that I highly recommend. 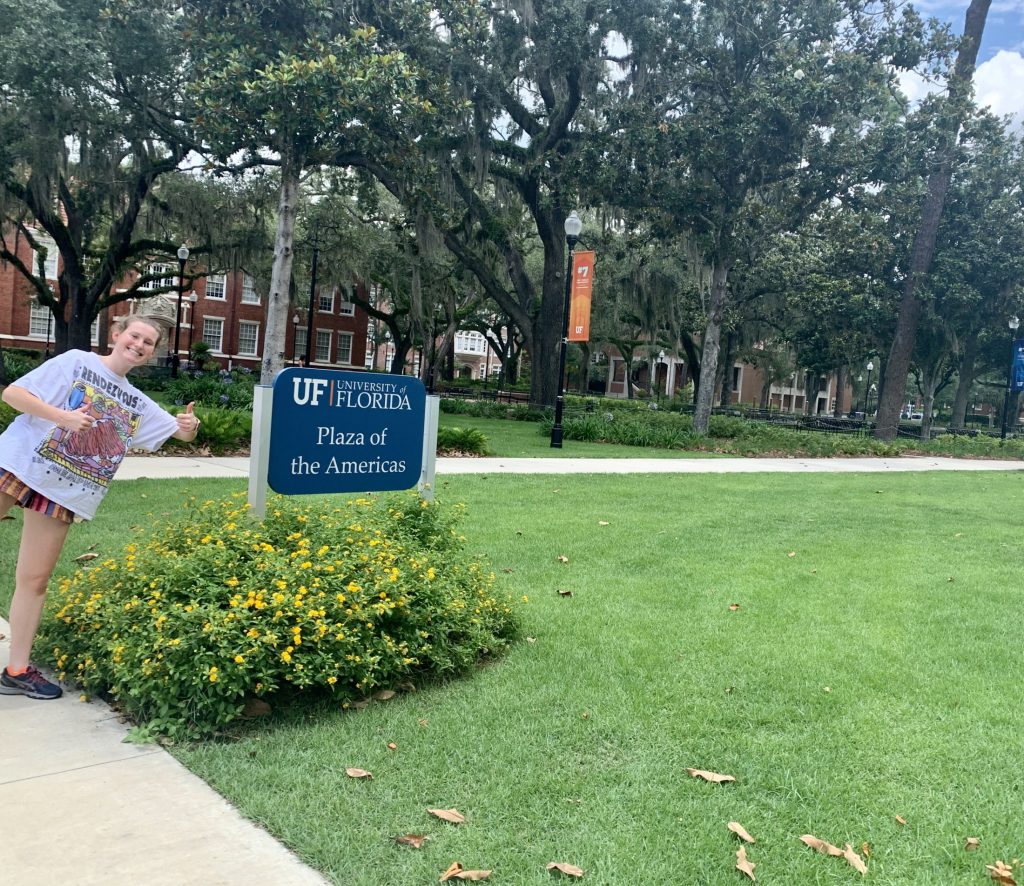 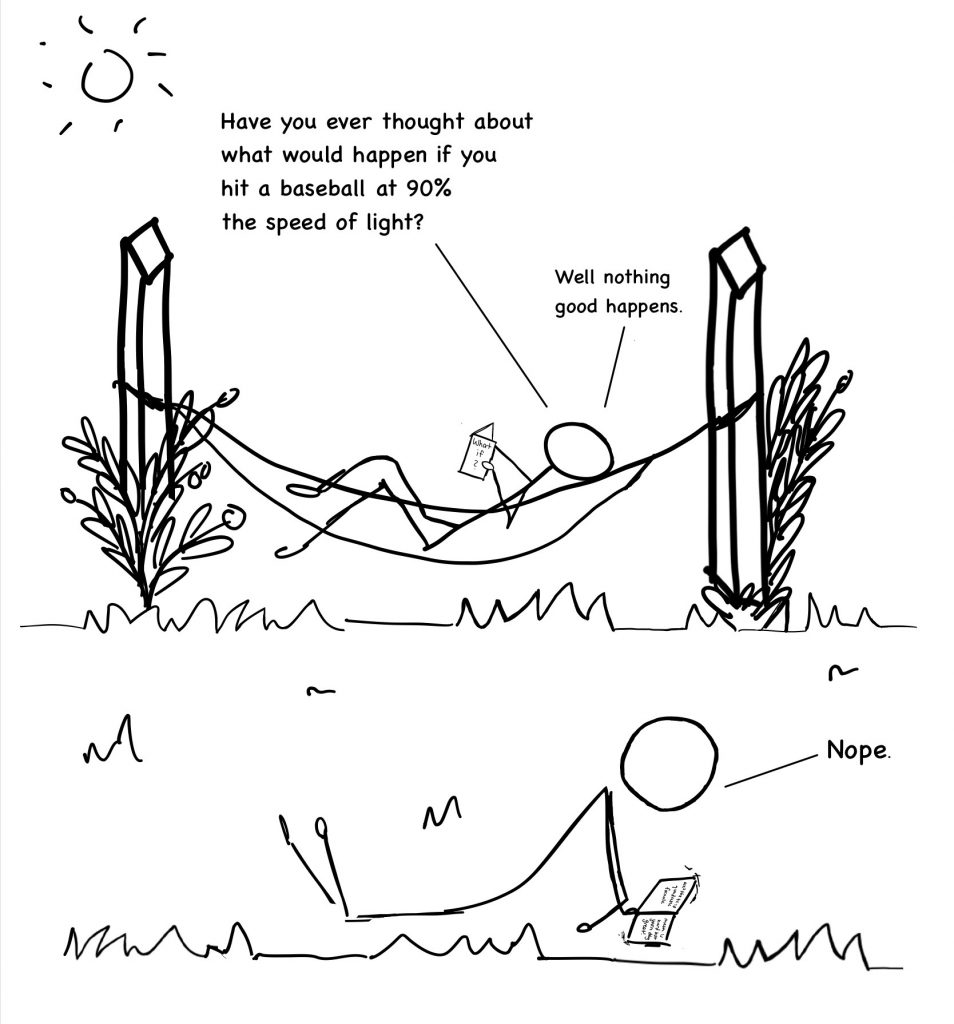 This guest post by an intern originally appeared in Wonder & Grow, a blog by Chelsea Collison, one of our former Museum educators.