In a socially distanced world, social media has become more ingrained in our lives than ever before. With its surge in popularity, scientists like archaeologist David Ian Howe have been sharing their knowledge in the form of 60-second videos on TikTok. 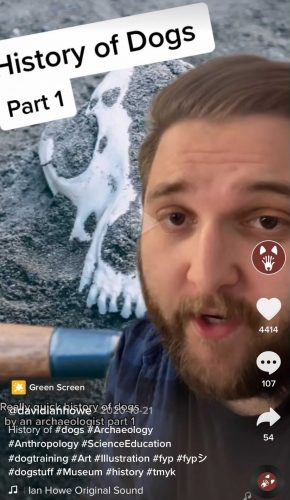 Howe, who studies the relationship between prehistoric humans and their dogs, has been making a splash here in Florida. He can be seen giving TED talks, on PBS, and on his YouTube channel. His TikTok channel, however, is garnering the attention of the masses. To date, Howe has accumulated over half a million likes on his educational archaeology videos.

As the K-12 Smallwood Foundation Fellow for the UF Thompson Earth Systems Institute’s Scientist in Every Florida School Program, I host a virtual science after-school program for Marion County students. Each week during the program, I introduce students to a mystery scientist. I’m a big fan of Howe and after seeing the response to his videos on TikTok, I reached out to see if he would serve as one of these mystery guests. Without hesitation, he obliged.

A week prior to Howe’s visit, I told the students he was from TikTok, but I didn’t tell them what he studied. Once it came to Q&A time, I could tell one of the students was noticeably nervous to speak to him. Though once Howe answered the first question, the student’s nerves were calmed and the excitement grew.

When speaking to the students, Howe reminisced about some of his favorite memories on the job, such as uncovering a mammoth fossil near a stream in Wyoming. Students were able to ask Howe their pressing questions, which sparked discussion on their thoughts. Even though the interview was scheduled for 30 minutes, it went on for nearly an hour because of how invested students were in the conversation.

As part of the Mystery Scientist segment of the program, I always ask my guests a series of questions like, “What made you become interested in science?” This helps dismantle preexisting misconceptions that students may have about scientists. After these discussions, students are able to relate to the scientist as a person, not just for the position they hold.

I look forward to introducing Marion County teachers and students to science in new and interesting ways through our Mystery Scientist program. I am particularly excited about one of our upcoming guests — a Canadian scientist who studies how climate change can affect evolution at the DNA level.