This year, I felt conflicted about offering the LepCamp program.

The summer camp program I started 5 years ago at the McGuire Center for Lepidoptera and Biodiversity instructs middle school students on how to make insect collections. Normal museum camps were canceled due to COVID, but there was a possibility of conducting them virtually.

On one hand, how well can one teach field work and collection-making over the Internet? On the other hand, our kids faced an unprecedented challenge of being cooped up inside during the spring and summer. Holding a week-long bug collecting camp, even virtually, could alleviate some of the “cooping.”

In the end, I decided to give it a go, and, surprisingly, things went much better than one would have thought. Eight students signed up, with one even joining us from another state.

At least half of the students had prior experience with collection-making. Two of my colleagues, Kristin Rossetti and Matt Standridge, joined me once again in teaching the camp. Both factors were crucial in the resulting success as the three instructors contributed differently to teaching, and the newcomers learned from the more experienced young entomologists.

As Kristin diplomatically put it, “Having an expert, someone really fun and engaging, and someone organized was helpful.” Perhaps these are three mutually exclusive qualities, at least at any given point in time 😊, but indeed, each of us probably exemplified one of these qualities the best.

We (using this term broadly, as it was really mostly Kristin) outlined the detailed schedule of our program and set up all the online logistics. And, of course, I managed to mostly ignore the schedule, frequently and sporadically starting to lecture about Lepidoptera biology – the subject I can talk about all day if not stopped. Matt talked beautifully about his love of being in the field, and the adventures and misadventures associated with it. His passionate engaging stories made kids want to become field biologists when they grew up. And Kristin kept us all moving in the right direction.

The end goal of the camp, from the campers’ perspective, was to make and submit photos of a diverse bug collection by Friday afternoon. This year, we also emphasized photography, so photos of any live insect taken during the week of camp counted towards the final goal. 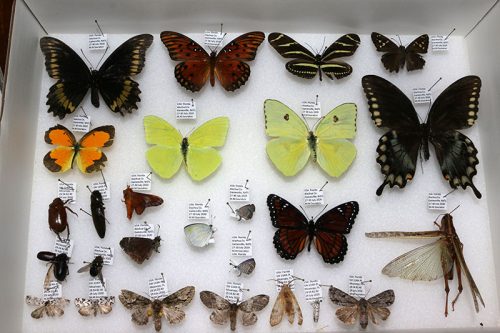 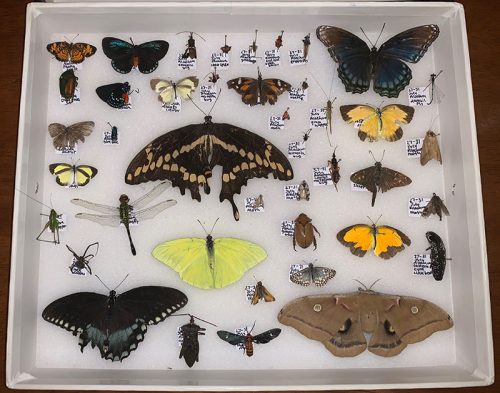 Examples of collections made by the campers.

We held two sessions every day, one in the morning and one in the afternoon. In between, I headed out with one of my kids to see what we could find in nature and then shared photos with the campers. They in turn shared their findings and we were able to field their questions in the process. Opening the camp early and leaving it open a bit later was a great call on Kristin and Matt’s part. These extended sessions of 15 minutes before each “class” and 15-30 minutes after allowed for supervised interactions during which students shared their entomological stories with each other. As Kristin put it, “My number one goal for this camp was to make sure everyone had fun, because I knew they would learn something new, no matter what. I feel like we accomplished that!” 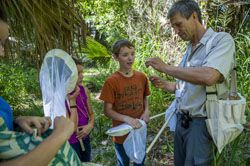