Beautifully arranged specimens inside delicate bell jars were once a common display method in museums or even private homes. Charles Doe, the Museum’s first Curator of Birds, created this bell jar. It has been displayed many times because of its exceptional quality.

This is Charles Doe’s taxidermic fantasy under glass. This item is fairly typical of the sort of thing that one would use to decorate one’s parlor with in the 18th century and the early part of the 19th century. This was before the passage of any federal laws protecting birds, when wild birds were still commonly sold for meat in the markets. You could go and buy yourself a basket full of Robins for dinner and it was also a time when they were commonly used as decorative bric-a-brac incorporated into scenes of the kind you see here.

Now of course the scene itself is completely ridiculous. Seeing all of these birds in such close proximity, when some of these don’t even share the same ranges, is totally unrealistic. But it’s an example of the kind of fantasy that people like to look at and that Mr. Doe apparently did as part of his apprenticeship in his earlier years.

Mr. Doe probably didn’t finish high school. Probably in his mid-teens he went to work as an apprentice in the taxidermy firm of Southwick & Jenks in Providence, Rhode Island. This item, as well as a number of others we have, seem to date from about that period in the 1880s-1890s. The evidence comes from the data on some of the specimen tags that are still retained with the specimens and even in some cases the dates on the newspapers that were used in stuffing in some of the backs of them.

It shows birds that are native to eastern North America and especially northeastern North America, so for instance it has a Snow Bunting in there. The Blue Jay is an interesting thing. Even though it’s a common bird, have a look at the giant size of the Blue Jay in comparison to the ones we see down here in Florida. This is plainly a northeastern one, where they are substantially bigger than they are here.

This is one of the most popular, eye-catching pieces that people gravitate toward whenever they come into the Division of Birds. We usually have it sitting up on top of a cabinet. Whatever people are looking for – they may be coming in to look at skeletons – one the first things they do is go right on over to this and some of the other taxidermic mounts that Mr. Doe did and gaze upon the oddity and the nice taxidermic work. Technically speaking as a piece of taxidermy the quality ranges from good to superb. The sum of it is truly world-class taxidermy. Mr. Doe obviously learned quickly and became quite good. Other items in it are merely adequate.

So it’s of very little scientific value and of course as attitudes changed and as laws changed this kind of item became completely obsolete and no one bought new ones anymore; nobody was making new ones anymore for people to decorate their homes. But you can still find things similar to this on eBay and the like. As long as they date from a time before the passage of the federal bird protection laws they are legal and there is a fairly lively trade in that certain residue from that time in our history when people liked to use these as decorations. 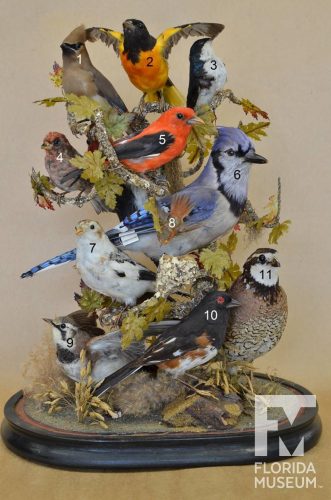