Bird Eggs from the Doe Collection

Charles Doe was the Museum’s first Curator of Birds, 1932–1946. The Doe eggs and associated historical data have been extensively used for research, including important studies in the 1960s that led to the ban of DDT – a pesticide detrimental to several bird populations.

The Charles Doe egg collection, I consider to be the core original scientific collection for the Florida Museum of Natural History. Before that the Museum consisted mainly of a miscellanea of a little of this and a little of that, and Mr. Doe’s collection was the first large collection that had a theme – in this case taxonomic (birds) and geographical (North America) – that had been filled out thoroughly and was well-documented scientifically. So it had a unity and a breadth that the Museum’s collection hadn’t had before.

It represents about 75 percent of the species and subspecies of North American birds. Each specimen comes with a handwritten record of all of the collecting data that were pertinent; that included nests, the details about nest sites, and the incubation stage of the eggs and various other things.

The egg collection was the life work of Mr. Doe, who for the first half of his life was strictly an amateur. He probably did not have a high school education, was early obsessed with birds and began his spectacular collection in the early 1880s. By the time he was finished with it, it consisted of about 13,000 individual sets or clutches representing the geographical and taxonomic categories that I mentioned before.

He worked on this as a sideline to his means of getting a living. He lived in Rhode Island and was a coal dealer as well as a few other things for most of his working career. He became close friends with an amateur naturalist who was a wealthy manufacturer who decided to, in Charles Doe’s later years, offer the collection to the University of Florida with an endowment. So the deal was that if the University would take the collection and the endowment they would also offer Mr. Doe a position at the state’s museum.

So Mr. Doe became the first curator in the early 1930s of a dedicated collection other than the general collection duties that the director, Thompson van Hyning, had taken upon himself up to then. Up to that time Thompson van Hyning was a jack-of-all-trades and had done everything. Charles Doe was the first one who came along to be the curator of what we now call a division within the Museum, that is the Division of Birds. So he is the ancestor of us all, including especially those of us in the Division of Birds.

From the Charles Doe Collection 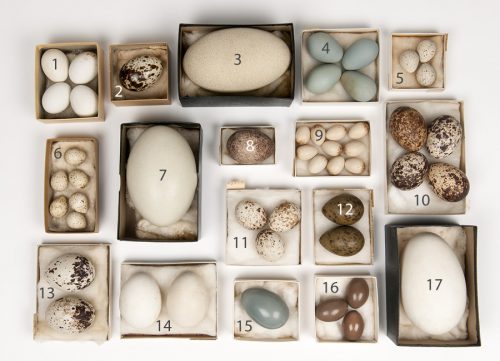